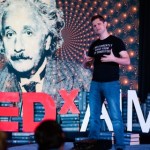 Yesterday’s TEDxAIMS was incredible. AIMS is the African Institute for Mathematical Sciences, an institution that provides full one-year, live-in scholarships to post-grad sciences students from around Africa, and leads the inspiring Next Einstein Initiative. I spoke about my experiences trying to build fancy-tech products in South Africa, and my belief that for as long as we think “technology spreads quickly”, we’ll be working on the wrong problems.

I used to work for some really big publishing companies, till in 2006 I left them to co-found an ebook production company. I thought ebook technology was moving fast, and that I was just in time to catch the ebook wave. Sony Reader and Mobipocket had been around for years already, and Amazon would soon launch its Kindle ereader. So we were ready to rock. And I was going to be rich!

And then, here in South Africa, for four years, nothing happened. We waited and waited for the imminent ebook revolution, surviving by doing any old work we could find, and experimenting like crazy on our own projects.

At one stage, we started publishing nursing textbooks, and we wanted the nurses to be able to take exams and get certificates online. So we built a website for this. But we soon discovered that many of the nurses didn’t even have email addresses or Internet access. Some didn’t know the difference between a username and a coupon code. And importantly, they didn’t have to know in order to be great nurses.

We kept losing money on projects like this, until we just couldn’t any more, and by 2011 we were dead.

I closed our offices. I retrenched my friends. I begged extensions from our creditors. And I took on a freelance print-layout job. I felt like an idiot.

As they say, being early is the same as being wrong. I had been working on tomorrow’s problems, and I hadn’t tackled the problems people had today.

Today’s problems can present real obstacles to new technology. Recently I was a tech advisor on a project to put ereaders into some local schools. We faced challenges like how to set up and maintain a safe WIFI network at a school. That was complex enough, but what really set us back was simple: could we give a 12-year-old child a valuable device to carry home, when they have to walk through a dangerous area every day? None of us wanted to put that child at risk, even if most of the kids would be fine.

For instance, we’re told and we believe that the mobile web is moving like lightning through Africa. Then why, according to our recent census, do 65 per cent of South Africans have no Internet access at all? Why, five years since M-PESA revolutionised low-cost banking in Kenya, do we still not have a mobile-banking service in South Africa that the poor can afford?

Last month, a report said that broadband access in South Africa had more than doubled in the last two years. Is that fast? Well, it sounds fast. But if we remove the celebratory tone from the press release, maybe it isn’t. Broadband penetration increased from 5% to 11% of South Africans. So, here’s the most revolutionary, democratising, business-enabling technology ever invented and in two whole years we shift the needle by a measly 6 per cent.

And if we want to tackle the really pressing, really interesting challenges of today, we have to accept that. We have to acknowledge that new technology seeps through society at the same oozing speed as everything else that’s new and different.

Why was it so hard for me to realise this; that I was working on tomorrow’s problems?

Well, I like gadgets. I build websites as a hobby. I read ebooks on my phone. I’d rather Skype the person sitting next to me than actually talk to them. I rely heavily on technology to organise my life. It makes me feel powerful.

So I also wanted my company to be about technology. I wanted it to be sexy and technically brilliant. I wanted to have ‘Featured on TechCrunch’ on our home page. I wanted to build products that I thought were impressive. And I wanted to feel smart for being at the forefront of this technological goldrush we’re always hearing about.

Everything we technologists do and everything we read about tells us we’re powerful and sexy.

And we pay a lot of money for that privilege.

Most of us have a good mobile phone and a computer. We get online every day, without thinking what it really costs us: our ISP and our WIFI router, our credit-based cellphone contract with our data bolt-on. Living in a suburb with computer shops nearby. The time to read tech articles. Going to schools and jobs with others who have fancy new devices.

All the things that make us tech-savvy cost money, even if we don’t notice we’re spending it.

So the most difficult thing for a technologist to learn is humility. It’s difficult to accept that what we make are just tools, and that we often make those tools unnecessarily complicated because we want them to make us look more sexy and more powerful.

If we’re lucky, that humility is forced upon us: there is nothing sexy or powerful about shuttering a company that no one wants, about begging for credit, or retrenching your friends.

Humble technology doesn’t even have to be electronic. One of the simplest technologies in the world is a well-placed checklist. In his fantastic book The Checklist Manifesto, Atul Gawande tells us that applying a simple checklist in hospital settings, particularly in surgery, can dramatically reduce complications and deaths. It’s hard to believe that for all our medical wizardry the thing that could really matter when you’re in hospital is a simple, written checklist.

That doesn’t mean it’s easy to make one: even a short checklist can take years of research and testing to get right. But once it’s done, its impact can be astonishing.

There are places in South Africa where a good checklist could save many lives. Our Free State province has the worst infant-mortality rate in the country. In some districts, more than one in ten babies die, most of those born prematurely. The crazy thing is that the situation can be so simply improved without high-end training or expensive machinery. Just three things can save the vast majority of premature babies: keeping a baby skin-to-skin with its mother or father, air from a simple ventilator, and a dose of surfactant (a substance in our lungs that stops them collapsing).

There is nothing futuristic or complicated about useful technology. It’s often quite ordinary. It’s so simple it’s almost invisible. And it’s driven by people who are more interested in solving problems than in building impressive products.

Now, as technologists and entrepreneurs, what would happen to our work if we accepted that new technology spreads really, really slowly? Would we also slow down?

In my work, I’ve largely abandoned my attempts to make and sell ebooks. At Bettercare, we only sell our nursing books in print now. And at Paperight, we’re building a network of print-on-demand bookstores just by helping copy shops legally print out books on any old printer. So we’ve empowered small printing businesses to act as bookstores in small towns and rural villages, working from shops and homes and even containers across the country, delivering cheap print-outs of books to people who’d never get to a big-city bookstore otherwise.

And it works because sometimes all you need is a quick, cheap print-out.

I’m not saying we should never work on powerful, impressive technology. Building the future is important, even if we’re not solving the problems of today. It can answer big questions, and help solve some of the problems of the future before we get there. But it’s an ivory tower, and we should acknowledge that.

We don’t need fancy technology to help people read, to teach, or to save mothers and babies. We need a humble kind of problem solving.

Technologists who understand existing technology are brilliantly placed to find simple solutions. They know a technology’s most stable, reliable, and universally compatible features.

If we can turn that knowledge to solving today’s problems, we can get a lot more done than if we try to solve tomorrow’s.